Saturday’s newspapers always reserve some room on their printed and digital editions to fit in the report on the clashes in Exarchia. The same article, slightly changed, is reproduced weekly just like the urban conflict it describes: police forces and urban guerillas gather and collide, every Friday night, with exceptional consistency, on the Tositsa Street or in the alleys near the famous Exarchia Square. A conflict that resembles a performance, weekly displayed in the showroom of Exarchia and condenses the rebellious nucleus of the neighborhood.

On one side, stand the armed police forces. Police trucks and bodies of policemen delimit the area, control the passage. Opposite to them, groups of young men, their faces covered in balaclavas, gesture aggressively, move constantly and dashing stones and Molotov cocktails against the enemy. Traces of gasoline all over on the pavements, the smell of teargas fills the air. The act, in its weekly repetition resembles a rehearsed performance. The actors in their aggressive gestures, try to imitate their ideological ancestors; rather their cinematic representations. Their angry voices spew curses, like spells calling the ancient spirit of revolt to be resurrected.

Walter Benjamin was one of the first to take notice of the mimicry and contradictions emerging in an increasingly mass society. He observed how spectacle was consuming reality and how mass culture did not anymore try to conceal scenes of poverty and violence, rather it was exposing these phenomena, to transform them into commodities. In a small booklet, entitled “The Author as a Producer,” he criticized an artistic and journalistic stream, called Left-wing radicalism, for its affinity to poverty; more or less like the “Vice” of the 1930s, looking for images of misery and rebellion. Their pens and photos, their words and images glorified, aesthetized and sold poverty to a mass audience thirsting for new images. To Benjamin, this stream transformed poverty into a profitable source of enjoyment by narrowing it down into spectacle.

Closer to us, but in the same category of critical thinkers, Mark Fisher came to realize the most extreme and extensive omnipotence of Spectacle. For Fisher, spectacle could not only integrate aspects of life that could have some subversive potentials, but could pre-corporate them in advance. For Fisher, Curt Cobain represented the tragic realization of this cultural dreadlock: “In his dreadful lassitude and objectless rage, Cobain seemed to give wearied voice to the despondency of the generation that had come after history, whose every move was anticipated, tracked, bought and sold before it had even happened. Cobain knew that he was just another piece of spectacle, that nothing runs better on MTV than a protest against MTV; knew that his every move was a cliché scripted in advance, knew that even realizing it is a cliché.” (Fisher, 2009:9)

What Fisher saw in Cobain was the last tragic reaction against the immobilization of a generation that came to realize its inability to speak, gesture, express originality; a generation trapped into pre-crafted actions and reactions, cliché answers to cliché questions; a generation that couldn’t resist anymore the image because it had become the image; a generation in despair, no longer able to reflect on and modify its place in this vast stage. In the case of Exarchia, the rebellious demonstrations of the full-faceted youngsters are the furious actions of a youth that cannot escape the image it has constructed for itself. 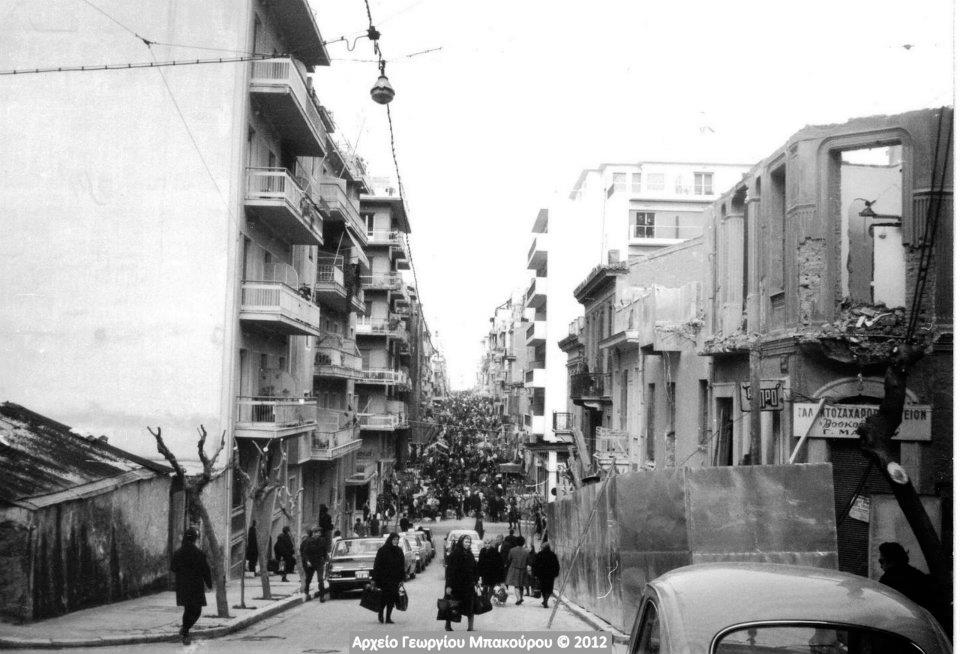 On the other side, Police Forces are violently executing the orders of a political system that wants to prove that it can actually intervene in the public realm; to prove that it still has power. But it cannot. State power has been neutralized by a bureaucracy that operates remotely, following no restrictions. The same force that transforms our human universe into spectacle is the same force that has neutralized State power reducing States into managerial structures striped back to their core police and military functions. The State that the rebels revolt against, IS NOT THERE.

Both the lyrical Left and the realistic Right, in our representative dipole, cannot articulate a political vision that can go beyond discussions on annual budget, balanced spending and need for reforms. For good or bad, power has been shifted away from national parliaments that have more or less transformed into managers of decision already taken and dictated from a de-territorialized bureaucracy. The lyrical Left and the realistic Right know that they are delimited in a domain with finite political capacities; a fact that weakens the political boundaries and blurs the distinction between Parties. What is Left? Some symbolic political gestures trying to convince people that there is an actual difference and thus a reason for parties to be.

Exarchia is a neighborhood so important because it is a forest of symbols; it has a long history of revolt and suppression; it is a territory that can still divide public opinion and mobilize collective emotions. In the media coverage of Exarchia you see the indefinite reproduction of symbolic clichés. An unstoppable struggle of rebellion and repression, that conceals the richness of everyday life in the neighborhood. In mainstream Media Coverage and public political discourse, Exarchia does not have any local residents living their common daily lives, any shops, no flows or interactions. Exarchia is portrayed as a land of constant and endless conflict. What may be familiar and common, gets muted and buried; What is left is the image of a disorganized urban zone where the forces of Order and homogeneity struggle against the forces of anarchy and violence.

The Minister of Citizen Protection knows how politically profitable the area is. He promises to make Exarchia, a Normal neighborhood. The normality he invokes is a myth; he knows that; he also knows that it is one of the few political arguments he can use to differentiate himself from his political opponents. When Stavros Balaskas, the chief of the police force, compares residents as trash to be cleaned, he knows that the extremity of his statement will activate the conservative reflexes of a huge amount of people that support him. The prerequisite for this political gambling is for Exarchia to succumb to the image that spectacle has created for it.

But everyday life is not only under muteness but also under the threat of eviction. The neighborhood of Revelation, the neighborhood of Rebellion Against Repression is the image and the myth that attract tourist waves that want to witness this alternative atmosphere and journalists who want to record the scenes of resistance. The circus of international correspondents who flοοd in to get a good shot of the weekly conflict or an interview with the prominent figures of the colliding sides, is hosted in an airbnb apartment of the neighborhood, driving an immigrant or a student or anyone who cannot pay for the high rents, out of the hood.

On March 18th, last year, the online reader of the Guardian could have come across an odd advertisement. The ad was calling the Guardian’s readers to visit Greece, in a tour led by the newspaper’s accredited correspondent in the region and navigate though the hard-hit neighbourhoods to look at lessons that could be drawn for the rest of Europe. The tour was offered at the price of 2.500£. The outcry was big. Numerous furious twits emerged against the advertisement, forcing the paper to remove it. The likelihood of a foreign crowd of adventurous leftists walking through dirty alleys, along semi-abandoned buildings tacking pictures of drug addicts and homeless people, was publicly condemned in moral terms. To them, this ad was offering a safari, live-streaming poverty, an exhibition in the Athenian urban museum. The Guardian may have removed the ad, but the phenomenon is still present. A few weeks ago, Athens Urban Adventures, a tourist agency located in Exarchia registered a new tour on Airbnb’s Experiences Section offering a look at bohemian cafes, discussions with anarchists and other interesting alternative urban experiences.

Exarchia, the alternative neighbourhood of Athens, finds its place on tourist platforms, in Spectacle and mass Media. The story is well known. Residents and tenants in the after-crisis lookout for some extra money, register their apartments and rooms creating offer. Alternative tourists and journalists of the crisis, cover the demand. This is how Exarchia has become Athens’ second most popular neighbourhood on Airbnb, by commodifying its alternativeness. The ritual, the weekly meetings on Tositsa Street every Friday night is another, slightly extreme, version of this saleable alternativeness. It is a live performance offered to any curious flaneur who would like to see the live acts of the heirs and followers of the spirit of the Rebellion.

The ritual of conflict, the manipulation of its symbols have swallowed the neighbourhood; they have empowered politicians who promise to restore a mythological Order; they have degraded the uncharted daily life of Exarchia and they have deepened the registration of the neighbourhood in the collective consciousness of mass tourism.

But can this neighbourhood escape its mythology, release itself from manipulation and heal its drain of constant evictions of its permanent residents? John Berger spoke and wrote against the mystification of arts by art authorities who obscure the meaning of images. He spoke out against the museumization and sterilization of art. He saw a liberating force, on the makeshift walls of young people who cut out pictures and texts in magazines and write their own codes, construct their own narratives, far from any authority.

I think that such a moving away and beyond the pre-crafted images sustained by the collective authority of spectacle could free up whole urban landscapes, including Exarchia. The life-giving power of the neighbourhood’s daily life needs more space; space to accommodate an alternativeness that does not pretend to be alternative; space for the permanent residents to create their own codes and lead to an organic instead of an intentional alternativeness.

Mass spectacle is the cultural logic of a system that has now prevailed and has nothing else to conquer. In the absence of any externality it turns into the things that it has already swallowed and writes and rewrites their codes; it returns to old symbols and presents them as new; it imposes lifestyles and invites us to buy into them; it containerizes whole neighbourhoods; it digests revolution and uprising. But there are also leaks and cracks that can no longer be concealed.

The environmental degradation that cannot be solved with a Molotov Cocktail. The epidemic of mental disorder that plagues cities and privatizes stress. The deterritorialized bureaucracy that interferes with domestic political decisions, whilst shaping individual desires and crafts the images that we consume as spectators and produce as performers.

Exarchia and every other neighborhood will get rid of the pre-crafted depictions that manipulate its past and present, if they allow people who want to become their organic part, to start writing the codes of the neighborhood by themselves. The only pre-condition of writing is to remember how to write.

When Fisher talks about post-lexia instead of dyslexia, he addresses the problem of linguistic poverty. We are surrounded by images that indefinitely follow one another and we have developed the ability to process their data fast and efficiently with no words needed. A slogan is enough. The eye has won and the word is defeated. But these images are framed and they fool the eyes; the data is not enough to formulate any comprehensive narrative of the world. The succession of frames disconnects the relationship between events and fragments reality.

We need to start using words once more. Perhaps this reflection on Exarchia could be the triggering effect for us to talk about the problem of cities, with our focus on our collective problems: the epidemic of loneliness, political disenchantment, environmental degradation, commercialisation of neighbourhoods and cities.

For people to rewrite the code of their neighbourhoods, allies are needed; Political institutions and municipalities eager to tackle urban and demographic side effects of mass tourism; groups that hack the tools of new digital multinationals; but mostly everyday people who want to live a different, unmonitored life.